I know the quesabirria taco trend is what’s hot in the food truck streets right now, but I’m partial to birria tacos. Maybe I’m old school, but birria on its own is super filling. Adapted from Food & Wine, these birria tacos are rich and tender, thanks to a combination of chuck roast and short ribs. Making these tacos is time-consuming (it’s best to start the day before), but they’re well worth it.

3. Make the tacos: Sprinkle chuck roast and short ribs all over with 2 teaspoons salt. Combine roast, ribs, and adobo in a large nonreactive bowl; toss to coat. Cover and chill at least 4 hours or up to 24 hours.

5. Remove chuck roast and short ribs from braising broth, and transfer to a large bowl; cover with aluminum foil to keep warm. Return broth in Dutch oven to heat over medium, and cook, uncovered, skimming off fat as needed, until reduced to about 8 cups, 15 to 20 minutes. Season broth with salt to taste. Shred meat; discard bones. Toss meat with 1 1/2 cups of the broth.

6. Stir together onion and cilantro in a small bowl; set aside.

7. Heat a large nonstick electric griddle to 400°F or a large cast-iron skillet over medium-high. Using a paper towel dipped in canola oil, lightly grease griddle. If using fresh tortillas, stack 2 tortillas, and use tongs to dip them together into adobo broth. (If using packaged tortillas, dip 1 tortilla per taco.) Place stacked tortillas on griddle; top with 1/4 cup meat. Repeat with as many tortilla stacks as will comfortably fit on griddle. Cook until bottom tortilla is lightly browned and crispy, 1 to 2 minutes. Fold tacos in half, gently pressing with a spatula. Transfer to a serving plate. Repeat process with oil, adobo broth, remaining tortillas, and remaining meat.

These tacos aren’t by any means authentic but they are without a doubt delicious. I use ground turkey and a generous serving of fresh herbs to create a “chorizo” of sorts (let’s be honest, I’m being really liberal with the definition of chorizo here). Combined with fried potatoes (uh, who doesn’t love fried potatoes?) and a smattering of onions and cilantro, these tacos hit the spot. 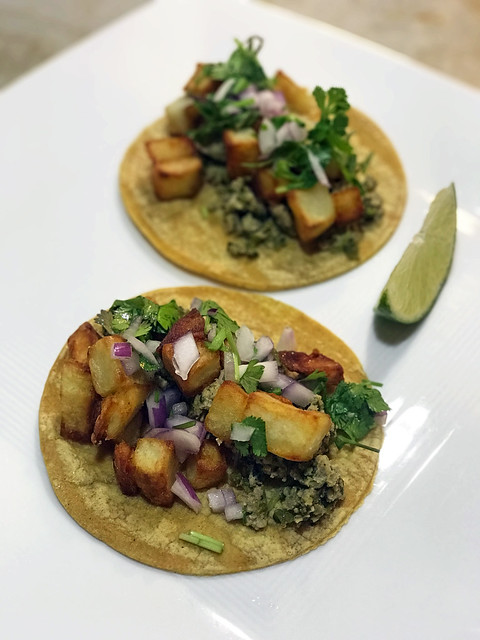 1. Heat a medium cast-iron skillet over medium. Add chiles and garlic cloves, and cook, turning occasionally, until charred and softened, about 4 minutes for serrano, 8 minutes for poblano, and about 12 minutes for the garlic. Transfer the chiles to a medium bowl, and cover with plastic wrap. Let stand 15 minutes. Stem, peel, and seed poblano. Stem and peel serrano. Set chiles aside. Let garlic cool, and peel cloves. Add coriander seeds and cumin seeds to skillet; cook, stirring constantly, until fragrant, about 20 seconds. Finely grind seeds in a spice grinder or mortar and pestle.

2. Combine chiles, garlic, ground spices, cilantro, vinegar, oregano, and salt in a food processor. Process until a coarse paste forms, about 1 minute, stopping to scrape down sides as needed.

3. In a medium bowl, mix the turkey with the puree and set aside.

4. Heat oil in a large nonstick skillet over medium. Add potatoes in a single layer, and cook, stirring occasionally, until golden brown and crisp, about 15 minutes. Transfer to a paper towelâ€“lined plate, and sprinkle with 3/4 teaspoon salt. Do not wipe out skillet. Return skillet to heat over medium-high and add chorizo, stirring often, until crumbled and cooked through, about 10 minutes. Stir in chicken broth and 1 teaspoon salt. Cook, stirring occasionally, until liquid is mostly absorbed, about 1 minute.

5. Assemble tacos: Top each tortilla with about 2 tablespoons chorizo, 1 tablespoon potatoes, and 1 teaspoon onion and cilantro. Serve with lime wedges.

This is both the most delicious and the ugliest flan I’ve ever made. The texture is unbeatable: think the silkiest flan you’ve ever tasted, and then some. I didn’t do a good job unmolding the flan, hence the awful photo. But the recipe is too good to not share. You probably already have these ingredients at home, so why not make it now? Enjoy. 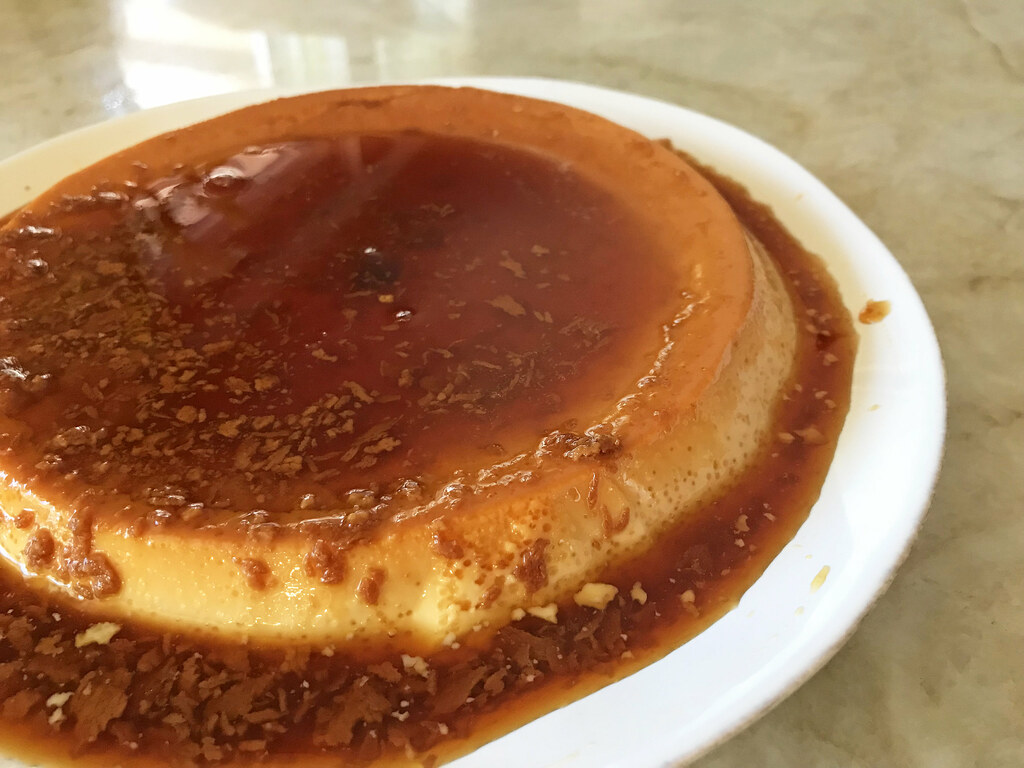 1. Preheat oven to 350F degrees. Place a kitchen towel on a work surface and set a 9 1/2-inch deep-dish pie plate on towel to protect from the heat. Place sugar in a medium heavy stainless steel saucepan. Cook over medium until sugar becomes fragrant and begins to melt around edges of pan, about 6 minutes. Gently swirl pan to incorporate melted sugar. Continue swirling pan until all of the sugar is completely melted and has darkened to the color of dark brown sugar, about 10 minutes. Immediately pour melted sugar into prepared pie plate, coating the bottom evenly. Let stand until cool, about 15 minutes.

2. Meanwhile, fill a large, deep roasting pan with hot water to a depth of about 1 inch (enough so it will not overflow when flan dish is added). Whisk eggs in a large bowl. Add whole milk, sweetened condensed milk, and vanilla bean seeds, and whisk until smooth. Add milk mixture to pie plate.

3. Set pie plate in the roasting pan and carefully place in the oven. Bake until edges are set and center retains a slight wiggle, about 50 minutes. Remove pie plate from water bath. Cool completely on towel, about 2 hours. Run a knife around edge of flan to loosen. When pan is rotated, flan should float in caramel. Press plastic wrap directly onto surface; chill at least 3 hours or preferably overnight.

5. Set pie plate in a shallow dish of hot water to soften caramel, about 2 minutes. Invert flan onto a large rimmed platter and serve.

Craving fish tacos but don’t want to go to the trouble of deep-frying? Then try this recipe. I thought I’d miss the crispy batter, but honestly, the flaky cod, the Old Bay Seasoning, and the tangy, seaweed-laced slaw make these my new favorite fish tacos. And they’re waaaay healthier and easier to make.

This recipe makes more wakame slaw than you’ll need for the tacos, which is fine, because it’s delicious on its own as a salad. 1. Make the slaw: Soak seaweed in warm water for 10 minutes to re-hydrate, then blanch by tossing into boiling water for 15 seconds. Drain wakae in a colander and rinse in ice bath. Drain wakame again and squeeze out excess water. Cut into 1-inch pieces.

3. Make the fish: Season fish with Old Bay and salt. Heat a large pan to medium-high and add avocado oil. Saute fish until cooked through and golden on both sides, about 7 minutes for each side.

4. Warm up the tortillas in a pan on medium heat for about 30 seconds per side. Place fish on a warm tortilla and top with a generous serving of wakame slaw.

Forget the adult slushie association. A true daiquiri is simple and balanced: a bit of rum, a dash of sugar, and a squeeze of lime. It should be bright, not sickly sweet. If you’re trying to figure out what to do with the last of the winter citrus, this daiquiri recipe is a creative riff on the classic, livened with the addition of mandarins. Feel free to substitute kumquats or tangerines. 1. Muddle lime and sugar in a cocktail shaker. Add mandarin and muddle until lightly crushed and juices are released. Fill cocktail shaker with ice, add rum, and shake vigorously until very cold, about 20 seconds. Pour into a glass and serve. Makes 1.