It’s raining outside and I haven’t seen the sun in what feels like ages, but I’m dreaming of summer. It’s my favorite season, and with Norooz (Persian new year) only a few weeks away, warmer weather is finally beginning to feel like a reality. And with that weather comes cravings for aab doogh khiyaar.

Aab doogh khiyaar is for Iranians what gazpacho is to Spaniards or what somen is to the Japanese. It’s a comfort food for me, evocative of long sweltering days where my family couldn’t be bothered to turn on the oven.

I tried recreating it last summer and it tasted pretty close to the nostalgic aab doogh khiyaar of my childhood. 1. In a bowl, stir cucumbers and green onion into the yogurt. Add the mint, tarragon, chives, walnut, raisins and salt. Mix well together.

2. Stir in water and mix. Adjust seasonings to tasted, and just before serving add ice cubes and bread and mix.

Koryo is my first true love as far as Korean restaurants are concerned. While I’d been sampling Korean food all over the Bay Area for years before I finally found Koryo in Oakland, it was the first where I became a regular. Despite the somewhat sterile interior (the space was under construction the last time I visited), their bulgogi and stellar banchan won me over. After a few visits, I decided to branch out with what I order.

The last time I was there, I eschewed the grilled items in favor of hoe naengmyeon, a bowl of cold noodles with raw skate fish and chili pepper dressing. It was refreshing and spicy, but after a few bites, I found myself wishing I’d ordered bulgogi. Maybe it was the skate – I love raw fish but wasn’t expecting to do so much chopstick maneuvering for so little meat on the bones. Maybe I had just gotten too used to having the bulgogi – the novelty of cooking your own food over a coal fire at your table while your cheeks turn red from the heat is so much fun, and the grilled beef remains my favorite dish at Koryo to date.

After several visits, Koryo is still among my top three favorite Korean restaurants. But the dishes are hit or miss, and depending on what you order, you may end up hooked or dissapointed.

Mussels are underrated. Cheaper than clams, but meatier and just as flavorful, they get a bad wrap. Sure, you probably shouldn’t order them in a restaurant (thanks to Kitchen Confidential, I’ll never look at a seafood special the same way again), but they couldn’t be any easier to make at home.

For this dish, it’s essential that you use fresh mussels. Don’t bother with the frozen, pre-cooked variety, otherwise you’ll get none of that good briny flavor that you want to achieve. 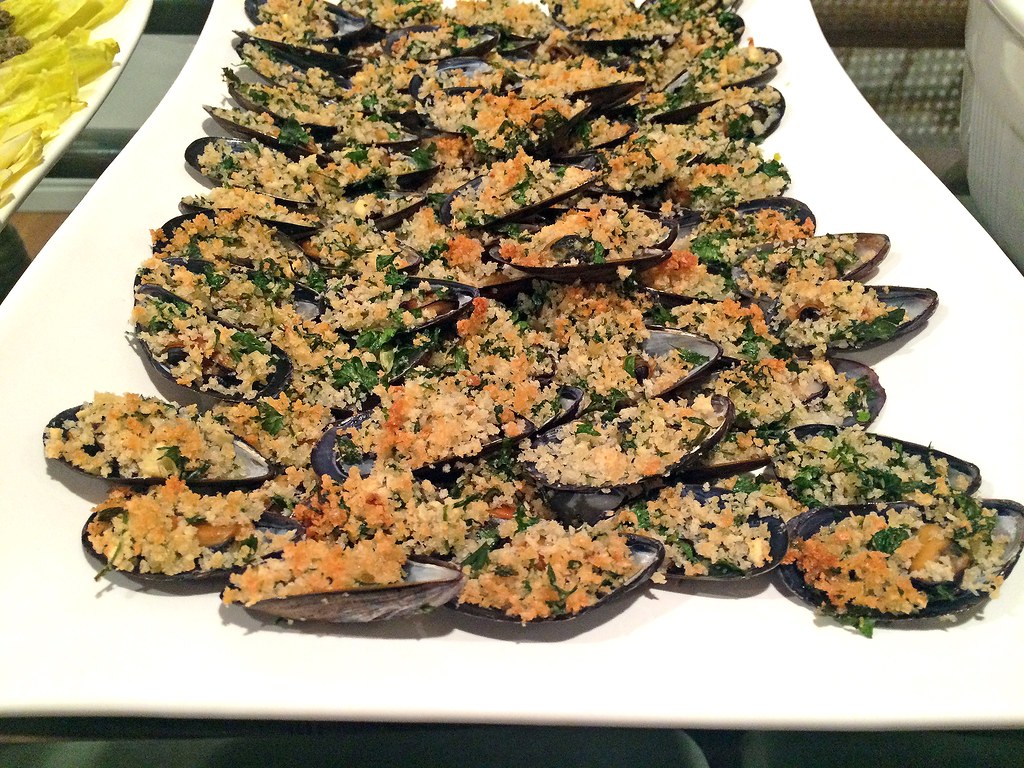 1. Preheat oven to 450°F. Bring water with mussels to a boil in a large pot, covered, then boil, covered, shaking pot occasionally, until mussels open, about 4 minutes. Discard any unopened mussels. Transfer to a bowl with a slotted spoon, reserving cooking liquid, and cool to room temperature.

2. Put the half of the mussel shells with mussels attached in a large shallow baking pan (discard other halves) and drizzle with a little of the reserved cooking liquid.

3. Stir together remaining ingredients, then top each mussel with about 1 teaspoon of mixture. Bake until crumbs are golden and crisp, about 5 minutes.

I know I reviewed Bar Cesar just over a month ago, but it’s worth mentioning again. A few months ago, I stopped by their Piedmont location with a friend to have dinner and sat at their patio on an uncharacteristically warm evening. This time around, we branched out from our favorite dishes and decided to try all new ones.

We started with fresh garbanzos with cumin. I love garbanzo beans (what Middle Easterner doesn’t?) but have never had them fresh in their pods. These were deliciously addictive and perfect with our Affligem blond ales. Next, we tried the oven-dried tomatoes, lomo and green garlic aioli on grilled bread. These were good, but not my favorite of the meal by any means. I felt like they could have used more flavor. We always try a cured meat when we visit Bar Cesar, and this time we tried the cecina, or air-dried beef. This was tasty and almost pastrami-like in texture, but sturdier. I prefer the fuet that I’d tried so long ago but would definitely try the cecina again too. The real star of the meal was the patatas bravas. Do not be put off by the generous serving of garlicy aioli – these potatoes are out of this world. If there is one tapa you must try at Bar Cesar, this is it. Dinner apparently wasn’t enough to sate our appetites for Spanish cuisine, so the next morning, I revisited Bar Cesar for brunch. We had the patatas pobres, a hearty and filling dish of potatoes, mixed cured meats and peppers topped with a fried egg. Next, we had the migas con chorizo y huevo, made up of bread crumbs, chorizo, fried onions and fried egg. We pierced the egg and let the gooey yolk mix with the other ingredients, and it was delicious. We ended our brunch on a sweet note with churros con chocolate. Bar Cesar always has the best churros, but I could do without the chocolate sauce, which was too sweet for my taste. Bar Cesar’s Piedmont location remains my favorite tapas restaurant – the service is warm, the vibe is unpretentious and their dishes are solid. One of these days I’ll have to find time to visit their Berkeley restaurant as well.