I hadn’t been to England in nearly a decade so when Nishan’s cousin got married in London this summer, I was excited. Not just for the wedding of course, but at the prospect of sneaking in every clandestine meal that I could during our short trip. You see, the London food scene has changed. The signs were already there during my last visit (hello, St. John’s), but now? No more touristy bangers and mash here, no sir.

I only scratched the surface, but I left London feeling like, wow. This city is bursting at the seams with energy and innovation. And that’s just the food. 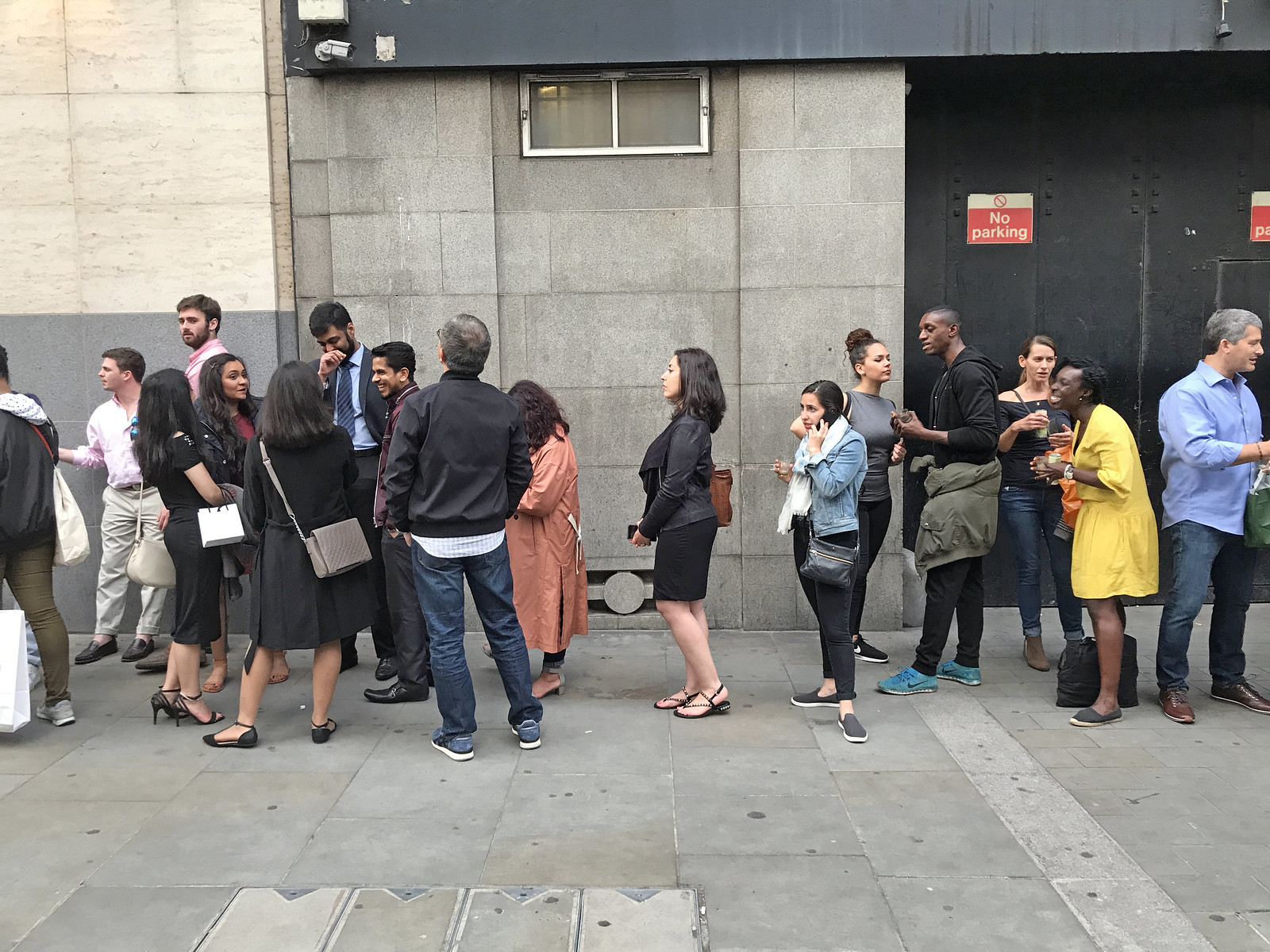 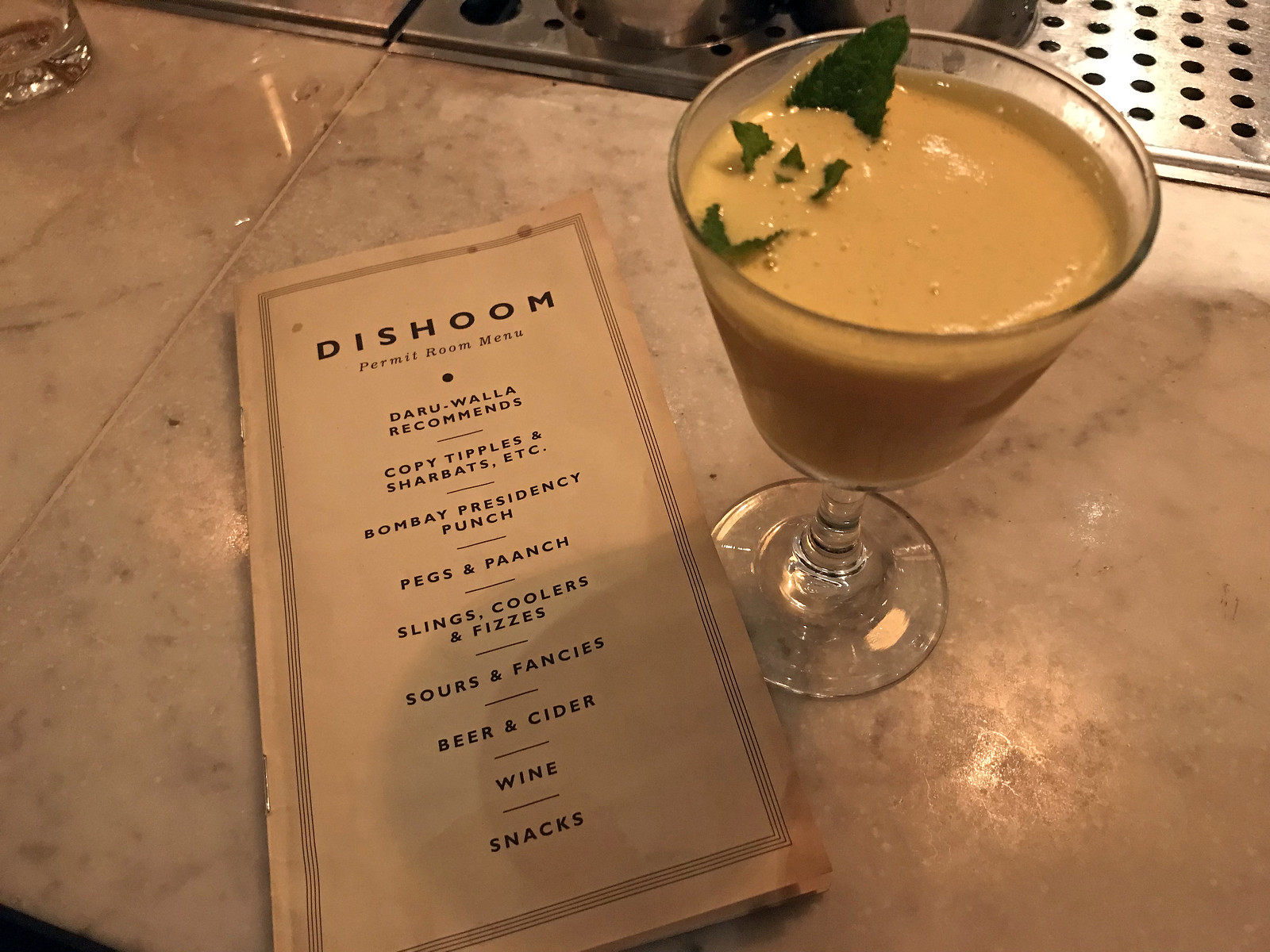 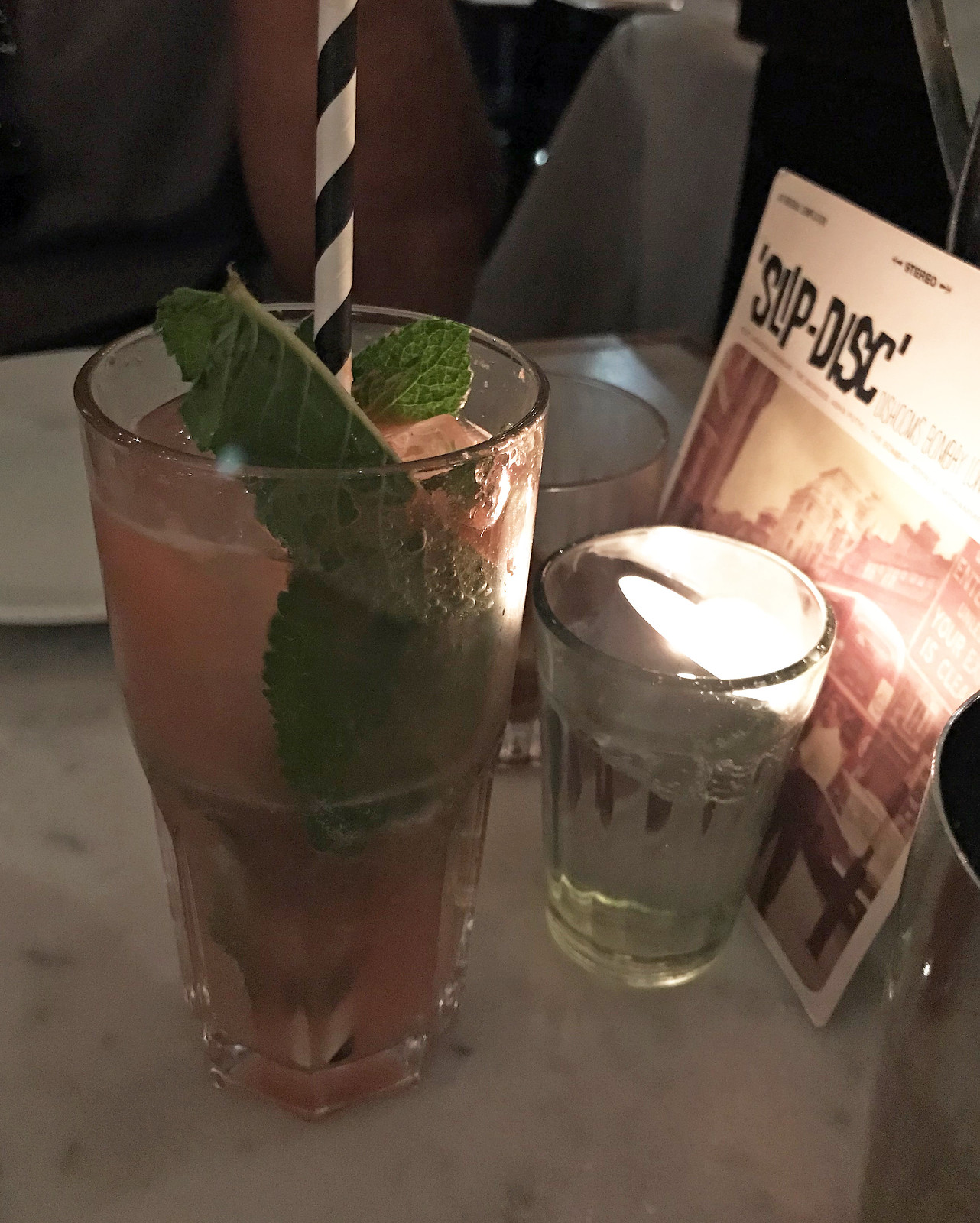 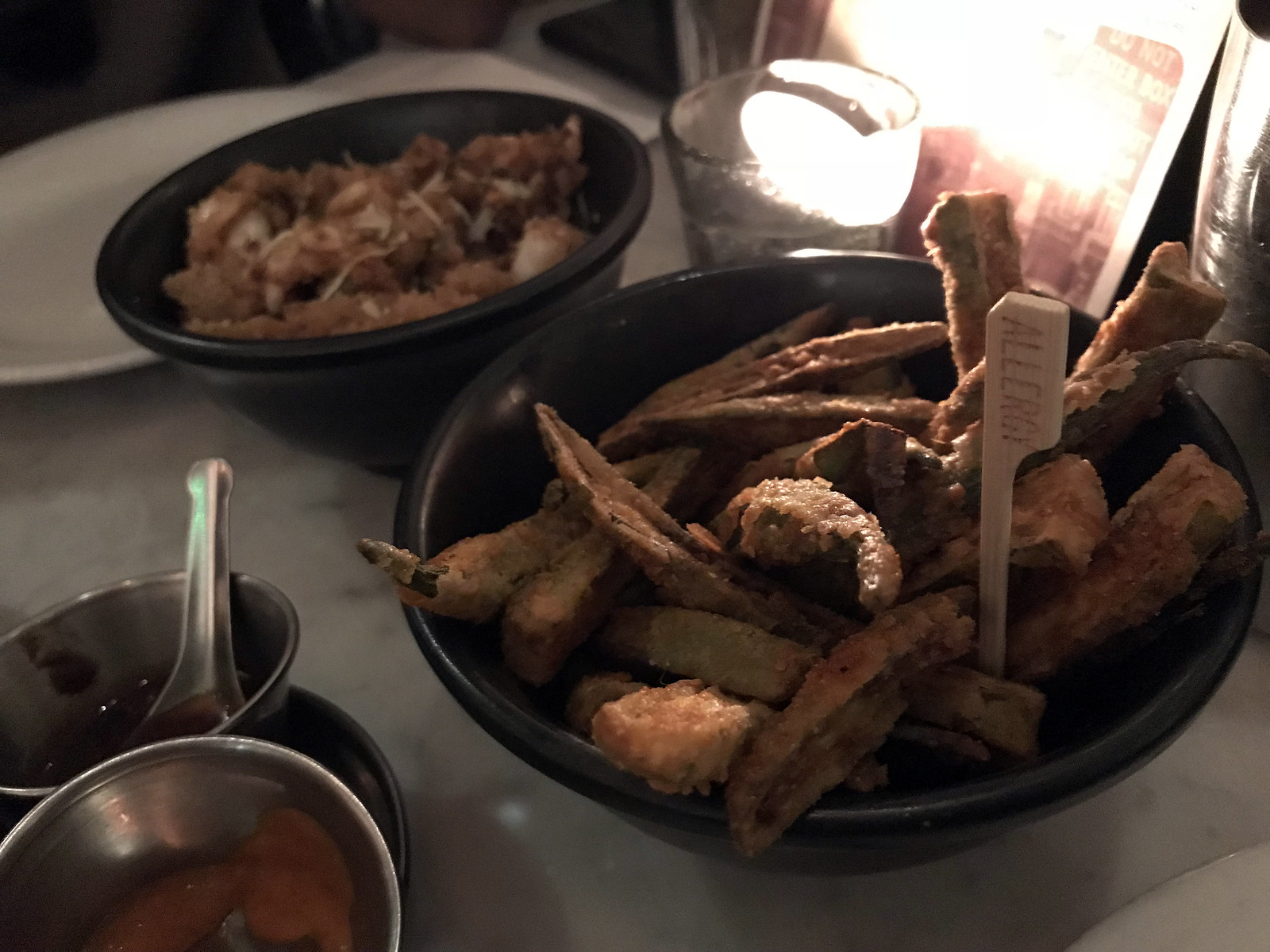 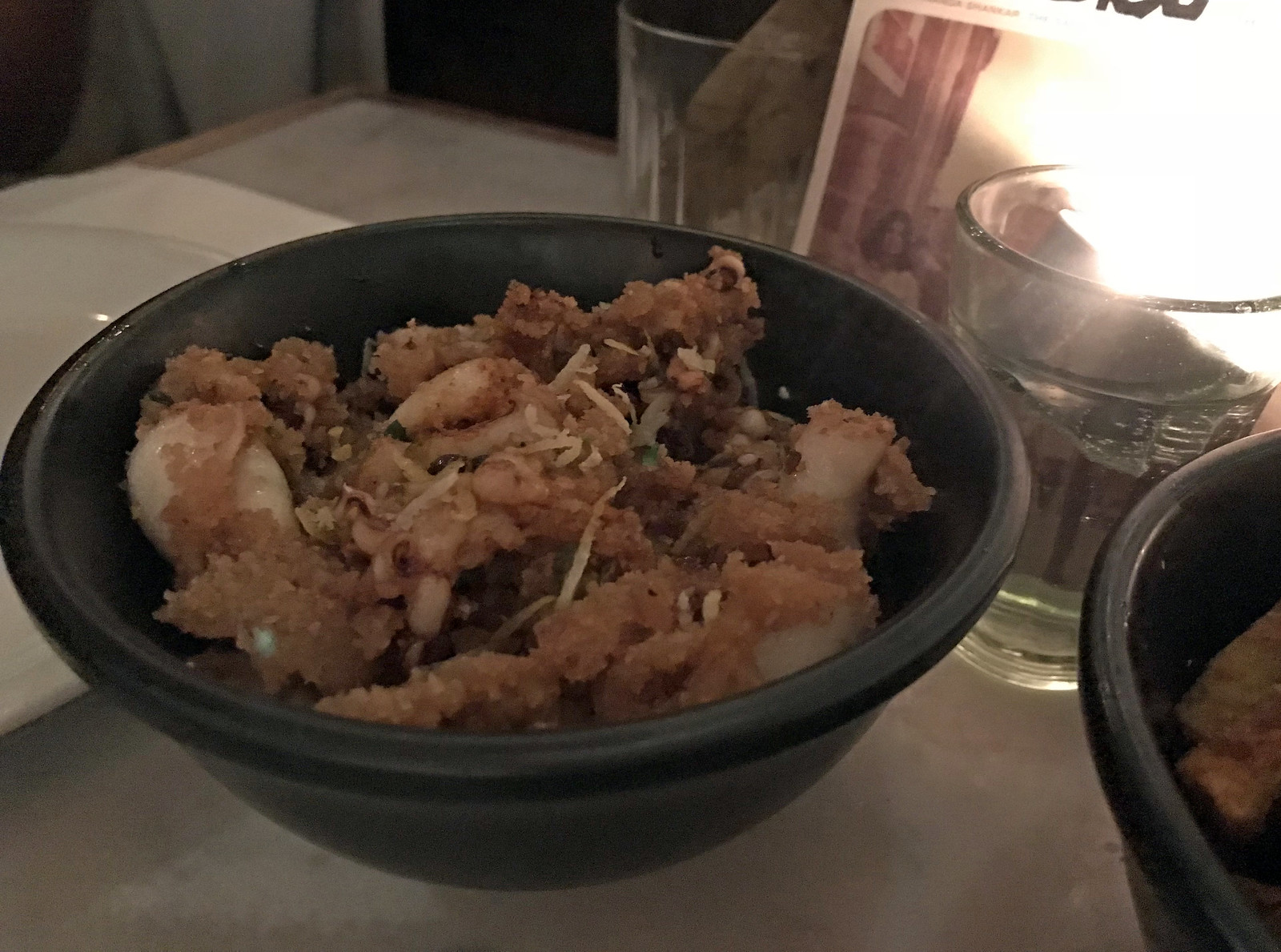 The line at Dishoom may snake around the block and the wait may be over two hours, but no matter. Jet lagged and delirious, Nishan and I dropped our bags at the hotel and ran straight to Dishoom, London’s ever-popular Indian spot with a strong 1960s Parsi cafe vibe. From the Cyrus Irani cocktail (recognize!) to the watermelon sharbat, the drinks were delicious and playful. The okra fries and the Dishoom calamari were my favorites (is there any vegetable as maligned as okra?) and the lamb samosa and jackfruit biryani were revelations how even the classics can be exciting again. I don’t know if we needed the gunpowder potatoes or the Dishoom chicken tikka, but I do know that if I lived in London, I’d eat here every week.

Irani cafe culture at Dishoom is strong, from the menu to the â€œgood words, good thoughts, and good deedsâ€ nod to Mumbaiâ€™s Irani and Parsi Zoroastrian community at the exit of the restaurant. 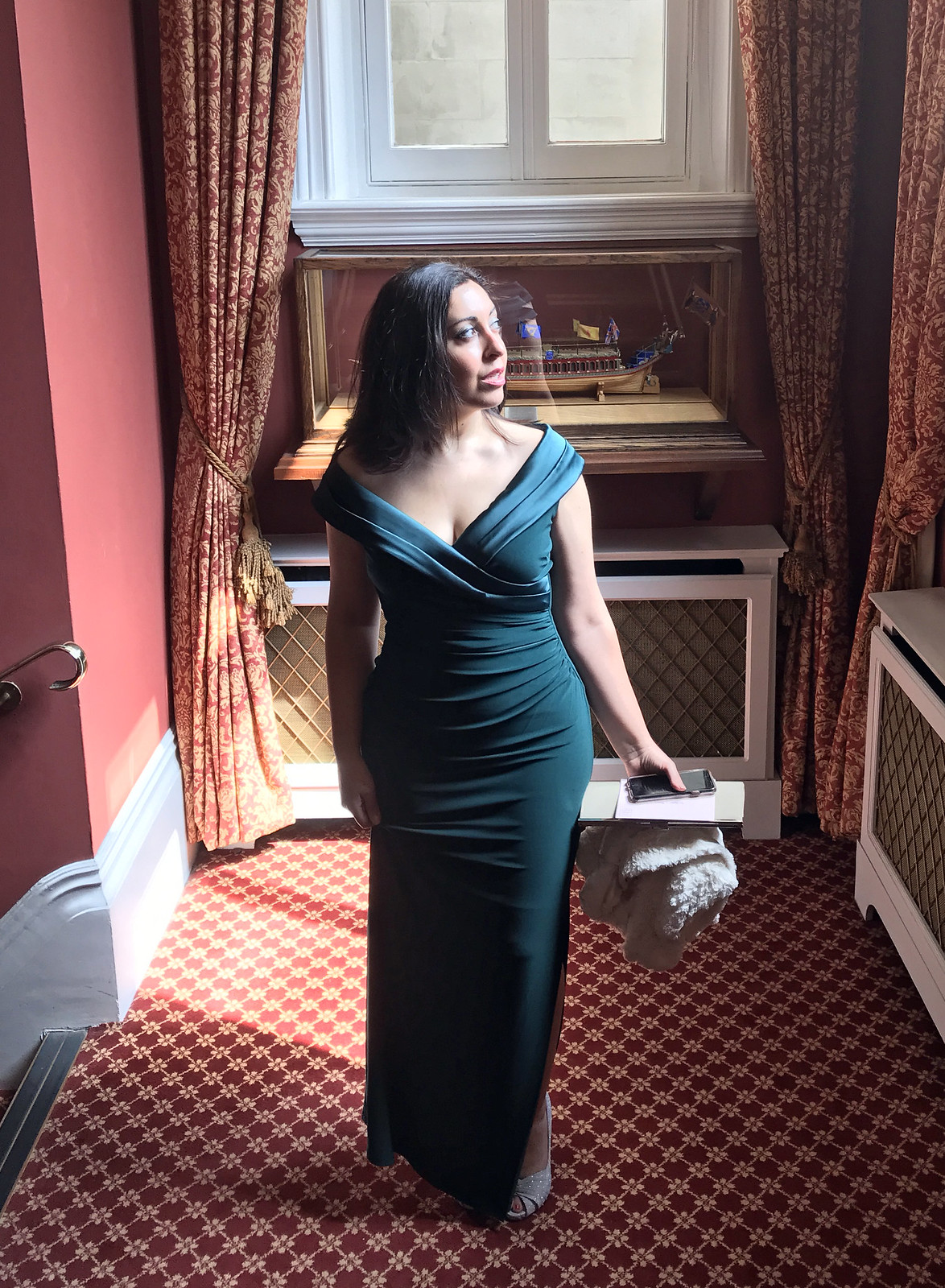 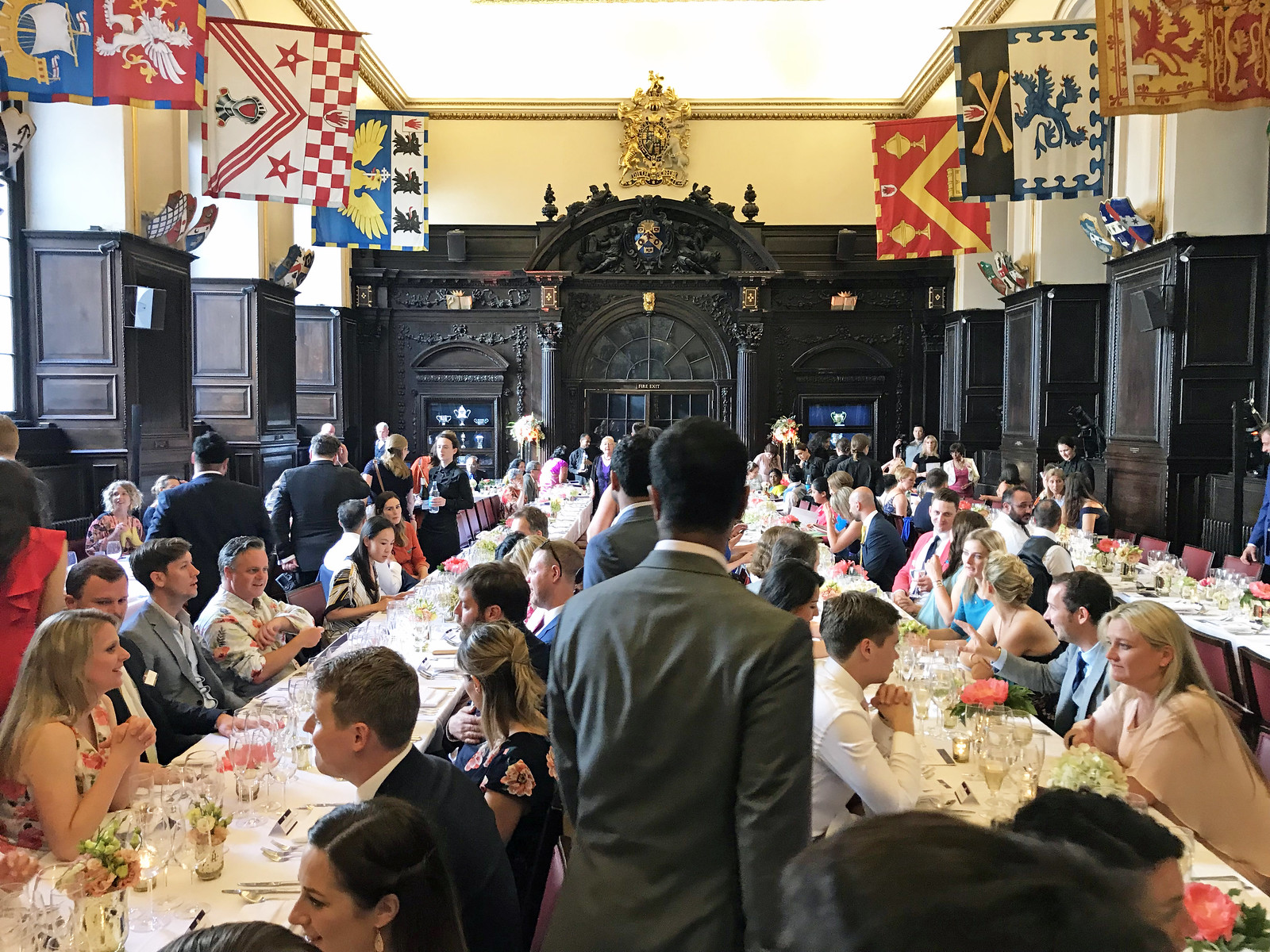 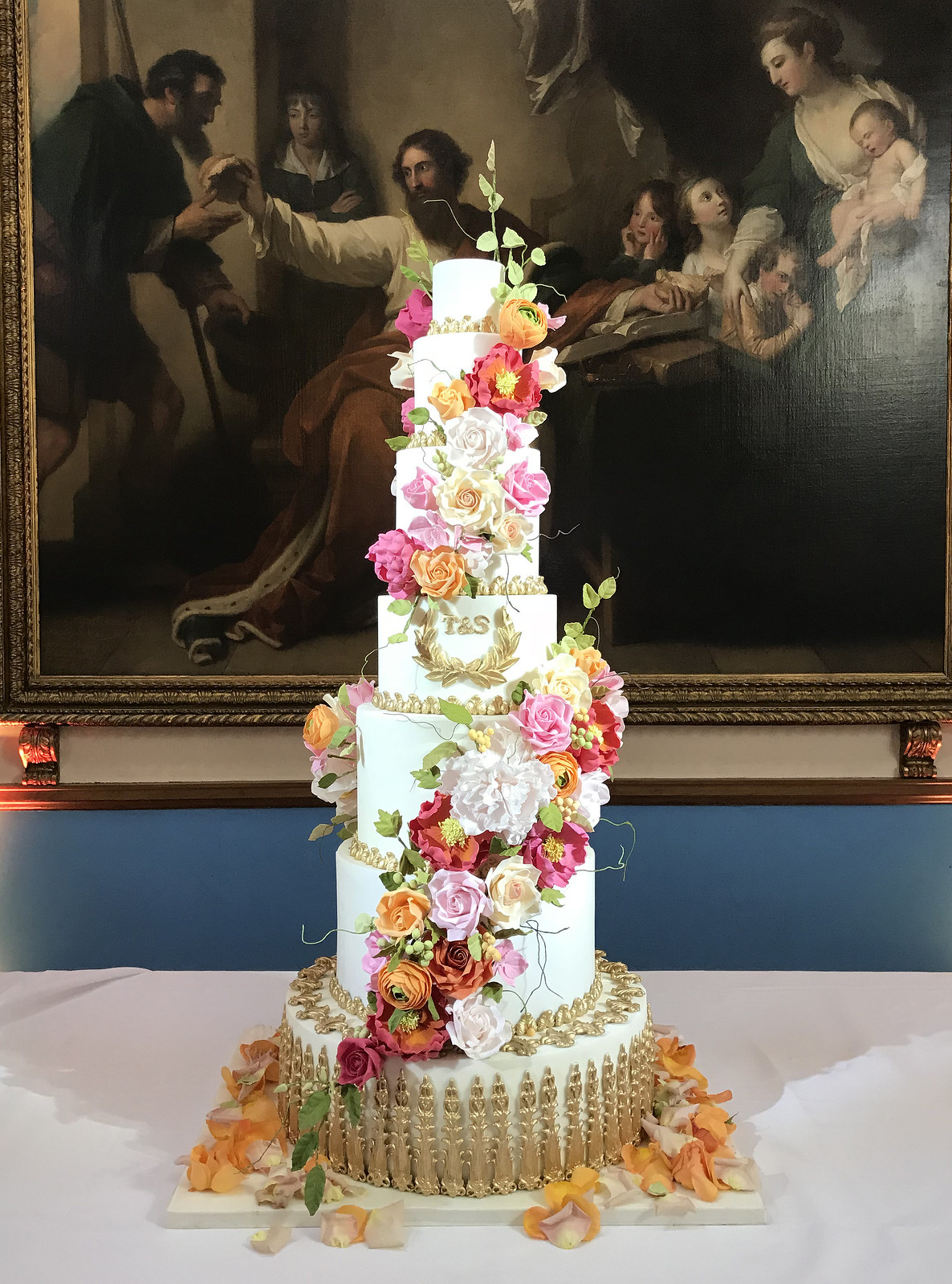 One gorgeous wedding later, we spent the next day recuperating before heading to dinner with the newly married happy couple. 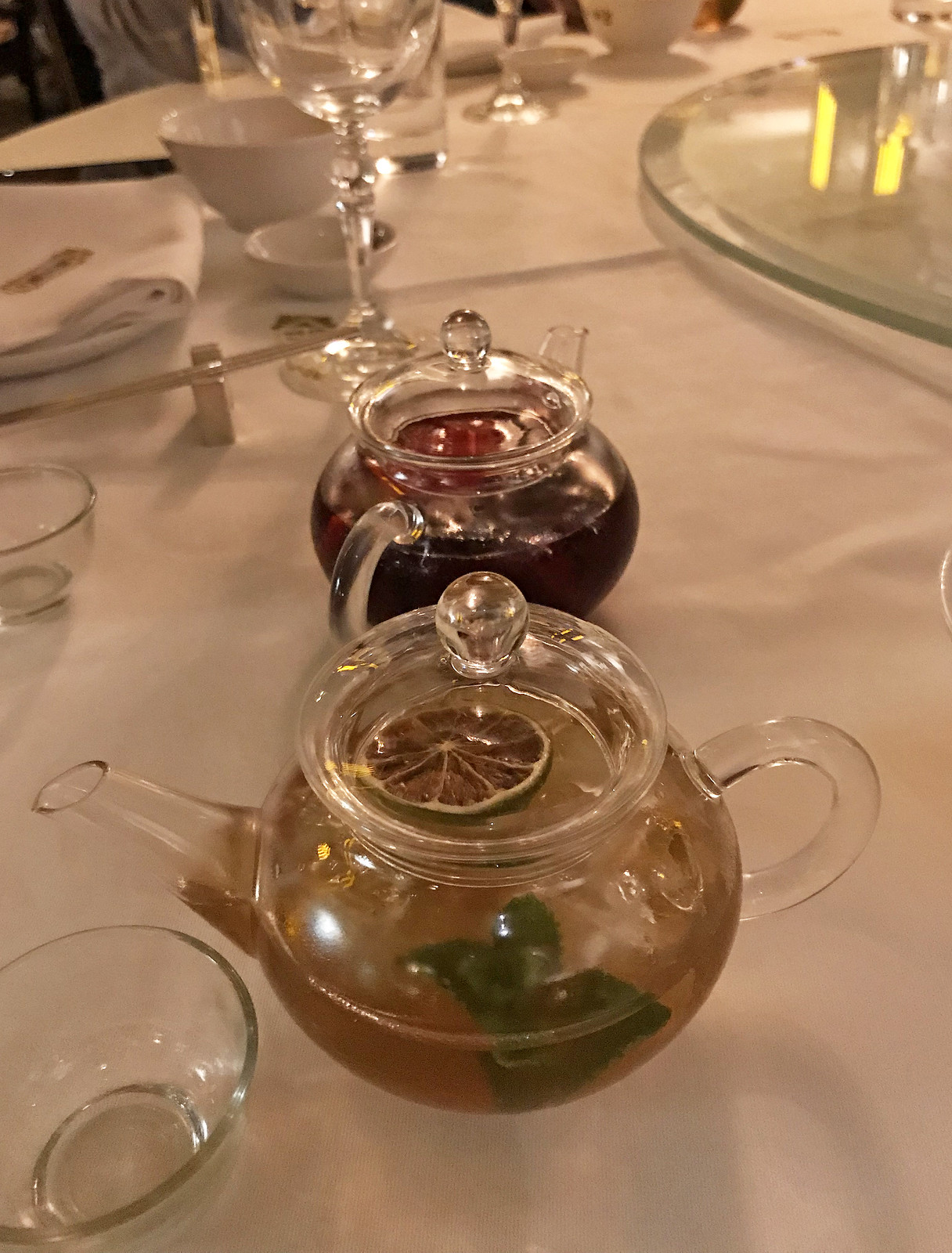 Do you want the best Peking duck of your life? Head to China Tang at the Dorchester. We enjoyed a brilliantly prepared banquet-style meal with an emphasis on duck prepared three different ways. Because of the low light, all I have is this photo of China Tang’s riff on a gin and tonic, but you get the picture: all the classics, served in fresh ways.

This time around, food in London kept making me think why didn’t I think of that? And that’s what’s brilliant about it. Their food scene has taken the comfortable, the familiar, and turned it upside down on its head in the best of ways.

I’m not particularly interested in royalty, but can you really visit London and not see the changing of the guard at Buckingham Palace? I mostly wanted to enjoy the parade and surrounding architecture, so it was memorable to see it firsthand. The whole thing lasted a lot longer than I expected, about half an hour from start to finish. It was hard to get a good look over all the crowds, so towards the end of the changing we walked across the street towards St. James Park for a stroll: It sort of reminded me of Golden Gate Park in San Francisco, sans Japanese Tea Garden and nouveau-hippies.

For the second part of our day, we took the Underground to Big Ben and the Houses of Parliament, also in Westminster: And there it is.

The Millenium Bridge and London Eye are all in the same neighborhood, so we strolled along the River Thames and took in the view for the rest of the afternoon before heading back to Woking. We had to get back early and prepare for the next part of our journey: Paris.

London is a rainy city. You probably already knew that, and as our luck would have it, it rained during every day of our stay in England. On our second day, it poured incessantly, which was unfortunate, because we had planned to visit the Tower of London.

We decided to brave the weather and go anyway, and arrived over an hour later than expected after some transportational rerouting and traffic jams as a result of the inclement weather. Famished, we took a break at Tower Hill Diner, where I had bangers and mash:

It was one of those dishes where the first couple of bites are good and then it all begins to taste heavy and overly-salty and yet simultaneously bland. I love sausages, but I’m guessing that sampling a British classic in the middle of a tourist zone flanked by Americans may not have been my best bet for authenticity.

We purchased our tickets and walked into the palace, poking in and out of the tower over the course of the next few hours:

My guidebook stated that the famous Kooh-i Noor diamond is housed here among the crown jewels, but much to my dissapointment the closest I got was seeing it in the Jewel House on a theater screen extolling the victories of the British Empire. (At least I got to get up close and personal with the Darya-e Noor diamond in Tehran a few years ago! And by up close and personal, I mean behind an alarm-generating, touch-sensitive, bullet-proof glass case.)

After a quick cup of coffee, my family and I walked across Tower Bridge over the River Thames, to get to the Underground:

Our next destination was Harrod’s, or as far as I’m concerned, Harrod’s Food Hall, also known as The Place Where Mariam Becomes Filled With Awe-Like Contentment And Wonder. Seriously, I was in my natural habitat. From foie gras and caviar to dim sum and South Asian sweets to cured meats and fresh seafood, this place has it all:

Part of me wishes we had something like this in California, and yet another part of me knows that if we did, I’d go broke on limequats and cecina and whatever else I could get my hands on.

Oh, London. So much rain, so little time to spend at your perfectly stocked gourmet foodstuffs.

I’m back! After three weeks in England, France and Turkey, I’ve spent the past week catching up and recovering from an unfortunate bout with pneumonia. (Note to travellers: Don’t ignore that cold.) I have lots of stories, so let’s just jump into things, shall we? (Plus, I have recipe updates I’ve been meaning to write up since, oh, January, and I need to get those too!)

My family and I arrived in London’s Heathrow Airport on a Saturday evening after our long transatlantic flight, marking the first and only time I’ve ever wished I was an East Coaster. I associate Heathrow with long stopovers on the way to Tehran, but this time we were picked up by Mom’s cousin and her husband (the most gracious hosts ever), where we were to stay at their house in Woking for the next few days.

The next morning, we set out to explore London. Woking is only half an hour by rail to London’s Waterloo station, so getting into the city was an easy task, and navigating the Underground was even easier.

Our first stop was the British Museum, which uh, is sort of really impressive, and stuff: The museum’s ancient Near East and Islamic Middle East galleries are incredibly extensive, with more attention devoted to these cultures than anything I’d seen in the U.S. (Okay, so the Freer and Sackler Galleries at the Smithsonian come really close.)

The Ancient Iran gallery houses none other than the Cyrus Cylinder, the first human rights charter: Oh hai. I’m in your territories, biting your bottoms.

Afterwards we took the train towards Tower Bridge, where we had lunch at Cafe Rouge before exploring the pier. I had the salmon croquettes with salad, french fries and lime mayonnaise: It was a little bland, but who can say no to deep-fried fishy goodness and chips? Later that evening, we drove to Windsor for dinner at Nandos, a restaurant specializing in really, really spicy chicken. You know, the kind where your lips go numb and an hour later you’re sipping hot tea with nabat wishing your stomach ache would subside. I had the chicken wings with Peri Peri sauce, spicy rice and corn on the cob. The chicken and corn hit the spot but the rice was undercooked: After finishing up, we took a short walk around town and Windsor Castle: Windsor seemed like a charming town, but we didn’t stay long since the drive back to Woking was almost an hour long and we were tired from jet lag and sightseeing. I’d spent the last several months planning this trip, and you know what? Not bad at all for our first day in England.