I grew up in Santa Rosa, ground zero for California’s 2017 historic fire season that wiped out so much of the city, county, and region last year. The neighborhood I grew up in was one of the worst hit. Months later, neighbors are coming back and there is no sound sweeter than that of rebuilding. Shout out to a resilient community.

By chance, I’d visited Santa Rosa the day before the fires, and my parents had sent me home with a huge haul of produce from their garden, as they always do. Apples, blood oranges, Asian pears, pomegranates, figs, Meyer lemons, persimmons, muscat grapes, Persian mulberries, Persian cucumbers, San Marzano tomatoes, sun gold tomatoes, Santa Rosa plums — I could go on and on. I’ve been very lucky to be eating farm to table well before the phrase ever entered the popular vernacular.

With the fire went the beautiful garden that my parents had lovingly built over the decades, and in the haze of the days that followed, I found myself with a bag of fruit that I didn’t want to eat. If I ate the fruit, the last vestiges of the garden I grew up in would vanish forever. But if I didn’t eat the fruit, it would, of course, go bad.

So I infused the fruit in bourbon. A year later, I realize that sounds strange, but in the moment, it felt like the right thing do to. And you know what? That infused bourbon made the best old fashioned I’ve ever had. It was bittersweet, but in a sense, it allowed the fruit to be frozen in time.

The apple and lemon and pear trees may be gone forever, but they can be replanted. They’ll grow and thrive again. And until they do, I have this recipe to remind me that there is joy to be found in all places, no matter the circumstance. 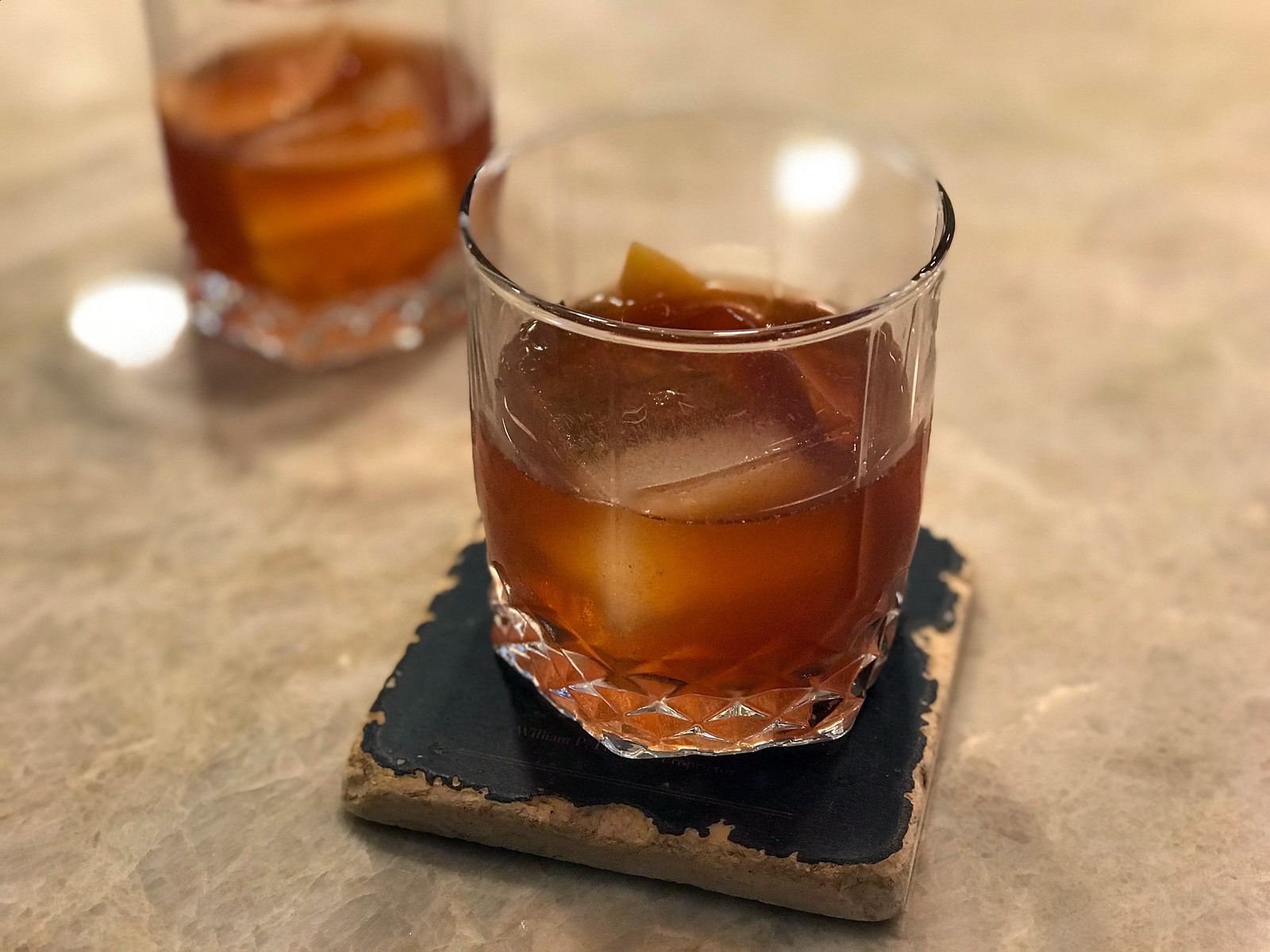 Ingredients for the infused bourbon:

1. Make the infused bourbon: Combine all of the ingredients in a jar; cover. Let stand at room temperature for 10 to 12 hours. Strain the bourbon through  a cheesecloth-lined fine sieve.

2. Make the old fashioned: In a rocks glass, muddle the sugar with the bitters. Fill the glass with ice and stir in the infused bourbon and water. Garnish the drink with an orange twist.

Rose season is upon us, friends. Rose all day, rose-yay, etcetera, etcetera. I’ve got to be honest, though. I like summer’s official beverage as much as the next person, but I don’t like all rose. A lot of it is too sweet for my taste, too white wine-y, too, well, too rose-all-day-ish, if you know what I mean.

But not this rose. This rose is (a) in sangria form, which is always a good thing, (b) includes rum and Campari, and (c) has too-pretty-to-eat-except-they’re-melting ice cubes that impart a subtly berry flavor to the whole thing.

So yeah. Rose season is upon us. Bring it on, I say. 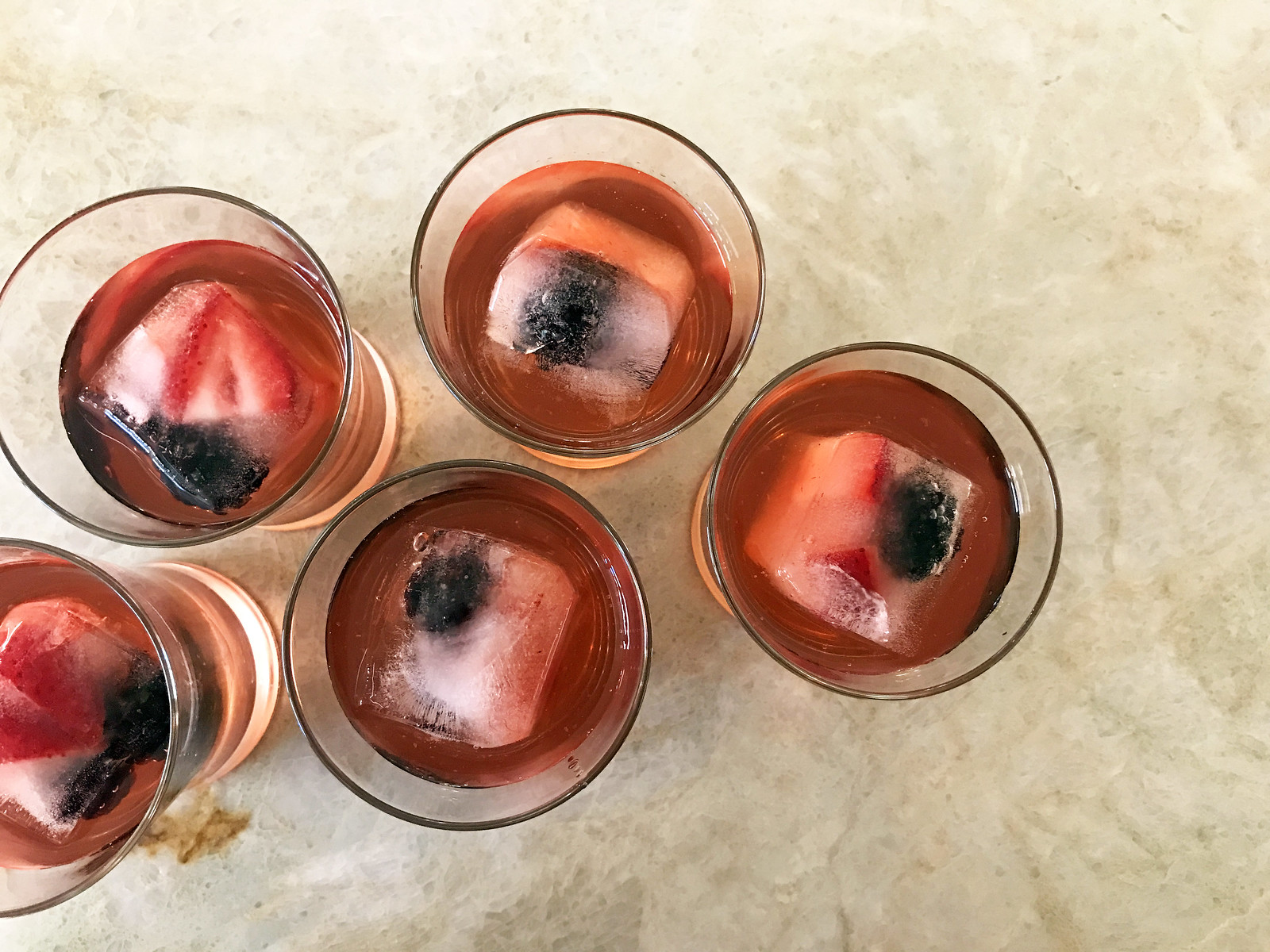 2. In a pitcher, stir the wine with the rum, simple syrup, Campari and lemon juice. Refrigerate until chilled, about 1 hour.

3. Serve sangria in individual glasses with two or three berry ice cubes each.

I know what you’re thinking. Manhattans? Too easy. But I beg to differ. I’ve had many a sad Manhattan: too bitter, too sweet, too weak. It’s easy to go wrong. I’m taking it back to basics. Artisanal vermouths are all the rage right now, but you know what? I actually prefer Martini brand vermouth in my Manhattans. It’s smooth and it’s balanced. Don’t knock it until you’ve tried it. 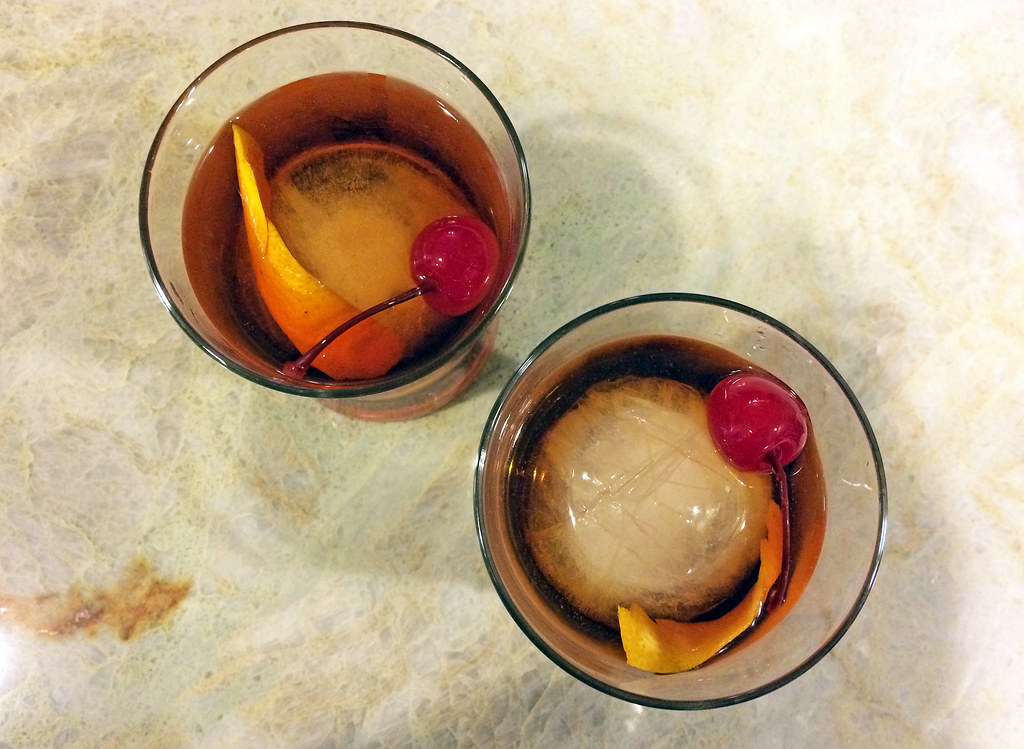 1. Combine bourbon, vermouth, and bitters in a mixing glass.

2. Divide cocktail among 4 ice-filled rocks glasses. Garnish each drink with an orange slice and cherry.

I think of shrubs as the cousin of sharab. It turns out there’s a reason why: today’s shrubs (vinegared syrup with spirits, water, or carbonated water) are a variant of sharab, which means “syrup” or “wine” in Persian, Hindi, and Arabic. Shrubs may be the base for the trendy cocktail of the moment, but its history is ancient.

Etymology aside, this peach and bourbon shrub is my favorite version to make. Peaches go with bourbon like waffles go with fried chicken, like palm trees with California, like Kamran with Hooman. You get the point. 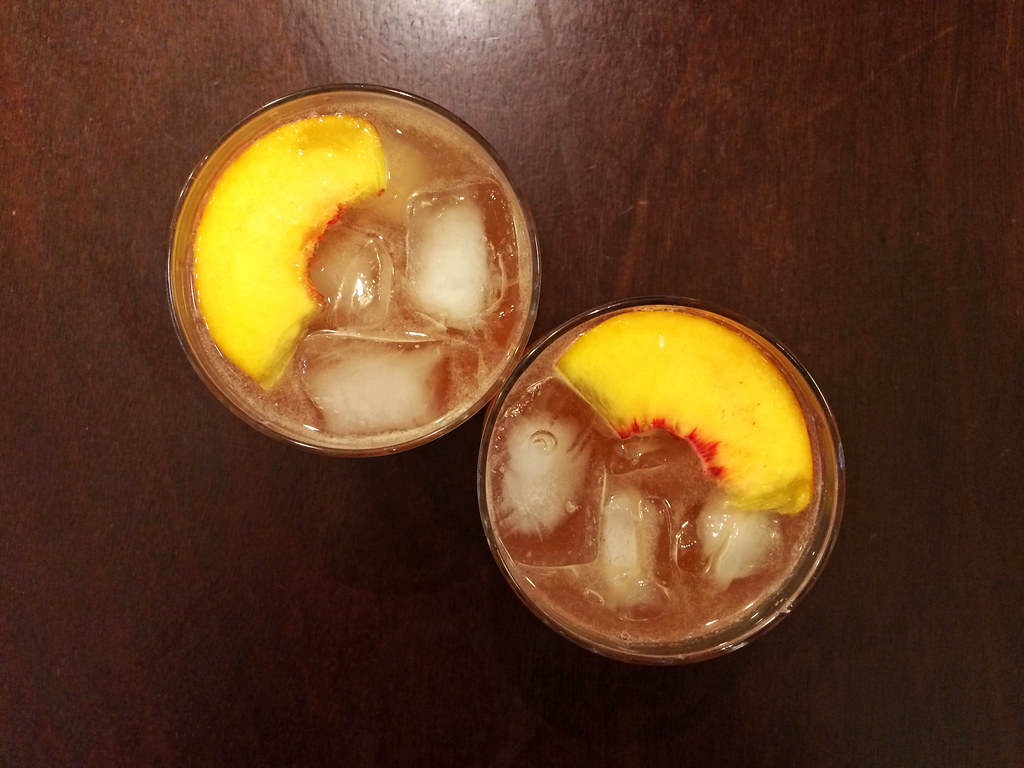 1. Bring sugar and 3/4 cup water to a boil in a saucepan. Slice peaches into medium pieces. Reserve a few pieces for serving and add remaining to pan. Reduce heat and simmer 10 minutes. Remove from heat and let sit 30 minutes. Strain syrup into a bowl; stir in vinegar. Cover and chill shrub.

This almond milk is incredibly easy to make, contains no sugar, and is absolutely delicious. I first concocted this rich refresher last year when I was trying to return to cleaner eating habits and ended up enjoying this by itself as a dessert.

With only four ingredients, this almond milk is a breeze — and much healthier than the additive laced versions you’ll find in the grocery store. Make sure you use raw almonds (instead of roasted) to achieve the right flavor. 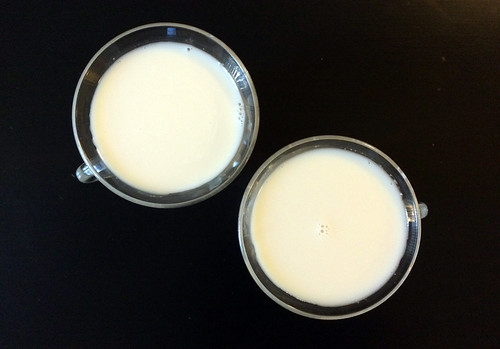 1. In a bowl, cover the almonds with water and let stand overnight in the refrigerator.

2. Drain and rinse the almonds; transfer to a blender. Add the dates, cinnamon, 5 cups of water and a pinch of salt to the blender and puree on high speed until very smooth, about 2 minutes. Pour the nut milk through a cheesecloth-lined fine sieve set over a bowl and let drain for 30 minutes. Using a spatula, press on the solids to extract any remaining milk; discard the solids. Transfer the nut milk to an covered container and refrigerate until chilled, about 30 minutes. Stir or shake before serving.