Yin Du Wonton Noodle opened up in Chinatown less than two years ago and early on, I became a regular. A short walk from work, I go there whenever I’m craving a warm, comforting bowl of Chinese soup (which is often). 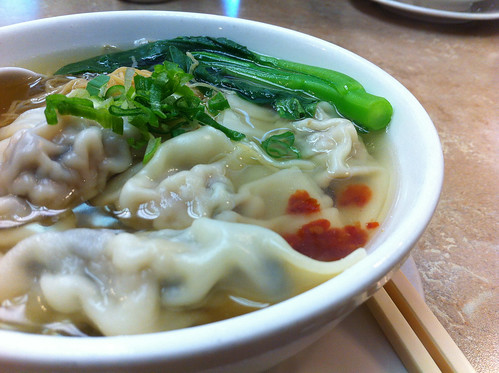 Yin Du’s cash-only menu is somewhat limited, and despite trying a few of their other dishes, I always come back to the number five: dumpling noodle soup. The chewy egg noodles and shrimp and wood ear mushroom-filled sui gao are perfect with a drop of fiery chili sauce. I often order their steamed beef brisket and noodle soup too, which is equally satisfying. The beef brisket sauce is delicious enough to stand on its own. The wonton noodle soup is pretty good too.

Yin Du Wonton Noodle is a casual operation and closes early at seven in the evening and is often packed for lunch. Plan accordingly and the next time you’re craving noodle soup, go for the number five.